skip to main | skip to sidebar

Company is looking for BSIS-licensed firearms instructor as partner in San Francisco/Sacramento area. Send queries by email only, to admin@security-guard-training.net.
Thank you.
Posted by Be Safe Gun Training at 9:20 AM No comments:

There is a course on March 30, 2009 at 5pm. The public is invited to attend at Academy Security Training / American CCW in Torrance, CA. Please call ahead of time to ensure seating. Walk-ins are not allowed in this class.

For more information, please check the website http://www.americanccw.com/
Posted by Be Safe Gun Training at 9:40 AM No comments:

The NRA Basic Pistol course is offered monthly in the Los Angeles Metro Area. The time is typically 10:30am to 1:30pm on a Saturday. 2 hours are classroom instruction and there's one hour of range time where you shoot 50 rounds with a Ruger MK III .22LR. The cost is $80.

For a more private lesson which covers the same material, you can schedule any day and time on a one-on-one basis. The cost is only nominally higher at $115.

http://www.besafeguntraining.com
Posted by Be Safe Gun Training at 11:44 AM No comments:

If there's a gun in a scene, an old writer's adage says, it had better go off. As that bit of advice suggests, there are few symbols more powerful than guns. They can represent liberation from oppression or serve as a weighty physical reminder of a lurking existential threat. No matter the association, the powerful emotional responses that guns elicit are largely responsible for the stagnant and vitriolic nature of the current gun control debate.

Posted by Be Safe Gun Training at 7:22 PM No comments:

For years, Nashville real estate agent Kim Hoard considered toting a gun for her safety at work and while traveling alone with her two children, ages 7 and 10.

She recently took action when she started getting harassing telephone calls from a man who saw her photo in an advertisement.

Hoard is now enrolled in a gun safety class that starts this month, and she is planning to obtain a permit so she can carry around a .38-caliber revolver that is now collecting dust at home.

"I have strangers in my car every day," Hoard said. "I meet strangers in empty houses all day long. For me, it seems like the logical step to protect myself."

Hoard is one of a growing number of women in Tennessee who have obtained handgun carry permits in Tennessee the past two years.

Last year, 9,921 women received permits to carry handguns in Tennessee — a record number. That was almost 500 more than in 2005, and about 80 percent more than in 2004, a year that ended a decline in such permits.

Permits are issued after completion of a handgun safety course, and after background checks and a fingerprint analysis by local, state and federal authorities.

Go to website
Posted by Be Safe Gun Training at 6:50 PM No comments:

More on the revolver versus semi-automatic issue

This question is irrelevant to the revolver versus semi-automatic issue, as differences will be due to the specific model you are evaluating.

3. How easy is the gun to shoot accurately?

Revolvers are generally easier to load than semi-automatic pistols.

With a double action revolver, you start by pressing the cylinder latch which will swing the cylinder open. This is a very easy procedure and does not require muscle power --- unless the latch is stuck or the gun is defective, but this would be an exception.

Then, you insert a round in each of the chambers in the cylinder. Again, there is little skill and muscle power involved in this.

After all rounds are inserted, you press the cylinder back into the frame. The gun is ready to shoot.
With a single action revolver, you open the loading gate, which requires very little muscle power and skill. Then, you insert a round into the chamber aligned with the loading gate. After loading one round, you rotate the cylinder one chamber over, and repeat, until you have all the chambers loaded. The gun is ready to shoot.

The process is more involved and requires more hand and muscle power with a semi-automatic pistol. You have to load the magazine with rounds. The magazine has an internal spring which will provide resistance to each round that you insert. The larger the caliber of the pistol, the stronger is the spring and more difficult it is to load each round. The first round will be the easiest to load but each subsequent round requires more finger muscle power and dexterity.

Most people of marginal finger strength are capable of manually loading the 9th and 10th round in a 9mm pistol’s magazine. Many can’t even load any rounds beyond the 5th round in the magazine. Usually, most people will be able to load the first and second round but it starts becoming more challenging beyond those rounds for some people.

The use of a speedloader can facilitate the loading of a semi-automatic’s magazine. However, this is not part of the pistol and it’s not a good idea to rely on a speedloader, which can be lost or misplaced.
Thus, the advantage goes to revolvers on the question of ease to load.

The advantage remains with revolvers over semi-automatic pistols.

Unloading is basically the reverse of loading, as discussed in the prior question.

A double action revolver is unloaded without muscle power and very little skill. The cylinder latch is pressed and the cylinder swings open. The user presses the ejector rod down into the cylinder and all the rounds and spent shells, if any, fall out of the cylinder. The gun is unloaded.

A single action revolver is unloaded by first opening the loading gate. Then, the user presses the ejector rod to remove each round or spent shell, one at a time until the cylinder is completely empty. The gun is unloaded after all of this is done.

With a semi-automatic pistol, there are two levels of unloading. The first level of unloading is actually quite fast and easy. You press the magazine release on the frame and the magazine drops. You catch it and put it aside.

However, the gun may not be unloaded yet. If you were firing some rounds before removing the magazine, there may still be a round in the chamber even though the magazine is not in the mag well of the pistol. You will need to pull the slide back to eject that loaded round. This will take a little muscle power, depending on the gun. And you will need to use your fingers to keep the action open by activating the slide release --- again requiring a little muscle power.

Furthermore, for complete unloading, technically, you need to remove the rounds from the magazine. And you will have to deal with the tension of the spring in the magazine, which does take a bit more muscle power and dexterity than with a revolver.

7. How easy is the gun to obtain training with?

8. How easy is the gun to obtain information about?

9. How easy is the gun to obtain parts and service for?

This is another question that is irrelevant to the revolver versus semi-automatic issue.
Posted by Be Safe Gun Training at 9:21 AM 1 comment:

Gun manufacturers are banking on women, from the soccer moms to professionals. Many women at the Blue Ridge Gun Range in Chantilly, Va., and elsewhere around the nation are packing heat for sport, self empowerment and protection.

"I am a short chubby housewife. I'm not as scared of the bad guys because the guns are my great equalizer," said Jacque Blundell of Arlington, Va.

The gun industry is catering to women with everything from more girly guns and apparel, to all female hunting trips to free ladies nights at the range.

It's clear the feminine touch is adding up to big business.

"A quarter to a third of all our customers here are women shooters," said Keith Weaver, employee at Blue Ridge Arsenal.

Five years ago the National Rifle Association offered just 13 firearms training classes for women, today there are more than 200 nationwide.

"If you look at statistics, there are more crimes of passion committed by men than there are women, but I say that everyone has their emotions and one of the things you learn when you take firearms classes is you learn to control your emotions," said Sandra Forman, President of the National Rifle Association. 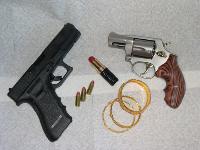 People are interested in the use of handguns for any number of the following reasons, in the listed order of popularity: · Personal protection · Recreational shooting · Competition shooting · Hunting · Collecting Women tend to be overwhelmingly motivated by the first reason --- personal protection. There is the recognition of the need to be self-reliant in taking responsibility for the protection of self, family and home. And there is a recognition that they can do more to protect themselves from the criminal element that can potentially accost them when they are away from home in their daily activities. Pepper spray is a worthy self-defense tool but it has its limitations. Stun guns are often ineffective. Knives and batons require an inordinate amount of training and expertise to use effectively. Long guns can do the job but are impractical as carry weapons. You can’t put these things in your purse or your pocket. Shotguns are good for home defense and certainly should be considered. However, handguns can be effective as home weapons and have the added benefit of possible double duty as a carry tool and the comparative ease of storage at home, which is important especially if there are children living in the house. Certainly, women do participate in recreational shooting and hunting, especially those who were raised in rural areas where gun ownership is a normal part of daily life. However, among newbies, women comprise a very small minority of the participants in these endeavors. Such is also the case with competition shooting and arms collecting.